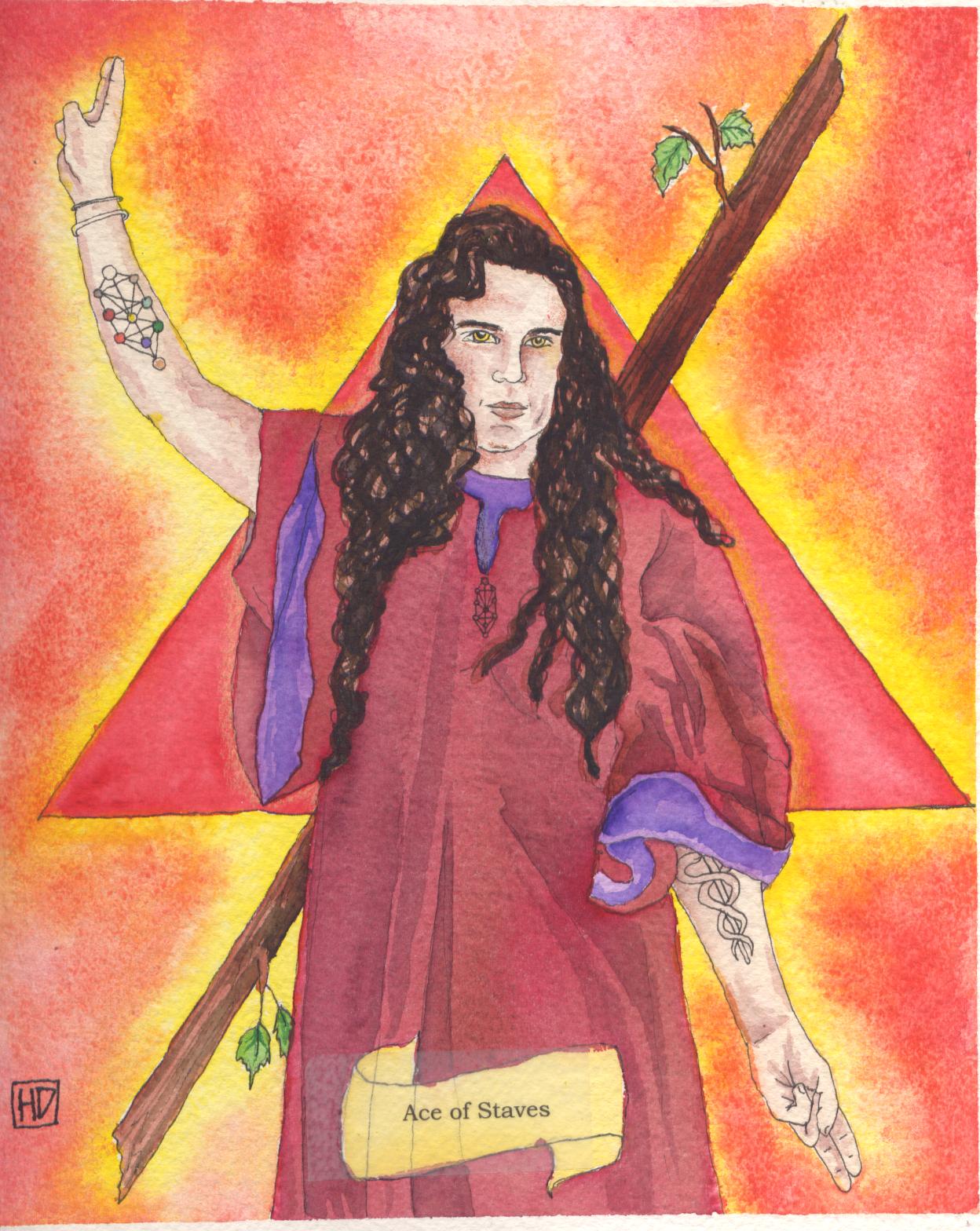 My card of the day is the Ace of Staves, which seems a really great card for discussing my experience at this years' Readers' Studio as it really was a great time for new opportunities and looking at my vocation in a new way! (OK so it has been a week since I was there, but hey! I needed time to process).

As a vendor, I don't always get to have time for all the presentations and workshops, but I do try to listen in as I can. I arrived on Thursday afternoon in the midst of the Tarot and Psychology Symposium, and was at least able to hear most of Elinor Greenburg's presentation on Tarot as a Therapeutic Tool. I have some new irons in the fire (which I'll be sharing soon) and it was interesting to hear about Tarot from this perspective.  It seems as though more and more Tarotists are looking at Tarot this way.

I was there with my very able helper Emily, and we were soon joined in our vending area by the very talented Rachel Paul of the Dark Carnival Tarot. Rachel and her husband turned out to be great Tarot buddies and Rachel and I had a great time hanging out and making art together while we vended. The Dark Carnival is a very modern, urban, young deck - I am sure my university students would really relate to it well. The images are intense, loaded with color, beautiful, and wild.

There was a cocktail hour later in the evening, but I found myself way too tired to make it. I think I fell asleep by 8:30 that night!

Friday was a very bustling day as most people coming to the conference arrived. Emily and I did "Foundation Readings" for one another. For those not familiar with these, they are a staple of the Readers' Studio conference in which the conference begins with all attendees reading for one another. The reading is then re-visited on Sunday. It's a great way to get things started and a great way to get people talking - although truly, Tarot people are very friendly and never seem to have a problem talking to one another!

Our vending area was joined on Friday morning by another very talented lady, Monique Hudson who creates beautiful decoupage jewelry. Emily and I came home with several of her creations. We all promptly decided we had the best vending area in the room. (No offense to other merchants! We just felt we rocked!) 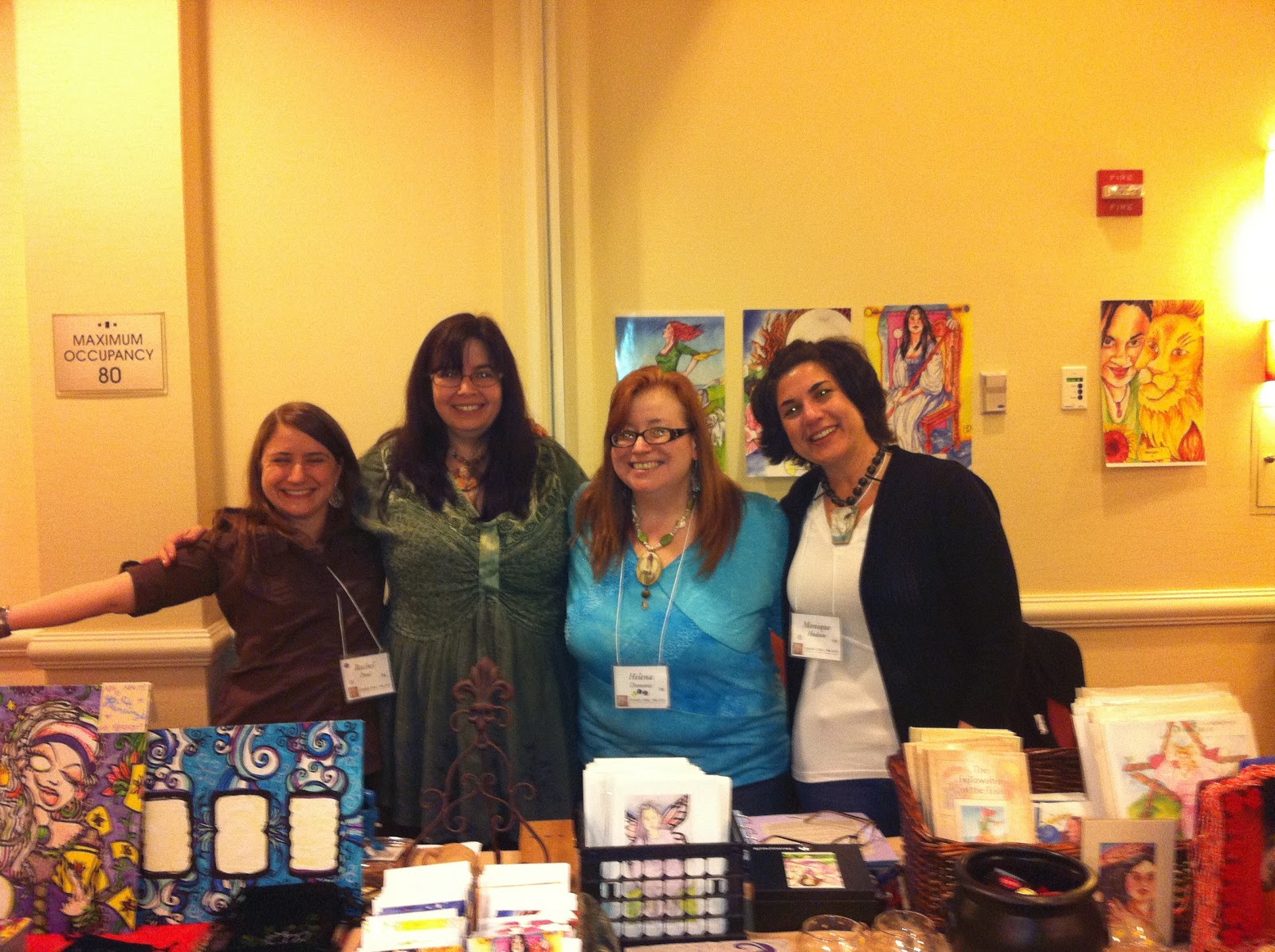 The Foundation Readings were followed by a lovely Newcomers' ritual, led by Sheilaa Hite who gave a beautiful guided meditation.  After that, we were served a sumptuous buffet luncheon. So far, a great start!

I have to confess the rest of the day is a bit of a blur to me. Em went into Manhattan to meet up with her sister in the afternoon and I enjoyed meeting loads of new people and making new connections. Again, another evening in bed super early. So much for the LeNormand class I'd been wanting to attend. *Sigh*

One thing I think would have made the event absolutely perfect would have been perhaps to include some energy/body workers amongst the merchants - I know my back got stiff from all the sitting and I would definitely have put some money towards a massage. And maybe I wouldn't have crashed so hard every night, although it's hard to say at an event like this, with so much energy to go around.

Saturday was another great day. Since there really weren't too many people interested in shopping at 8AM, I was able to attend the Breakfast Roundtable with Theresa Reed which focused on Tarot as a business, attracting new people to Tarot and so on. I gave my new bud Rachel lots of props as someone to encourage as a young person who is bringing lots of new people unfamiliar with Tarot to the Tarot. Theresa proudly proclaimed herself to be a Ferengi and was very happy to help us with the discussion on expanding Tarot as both a business and a practice. 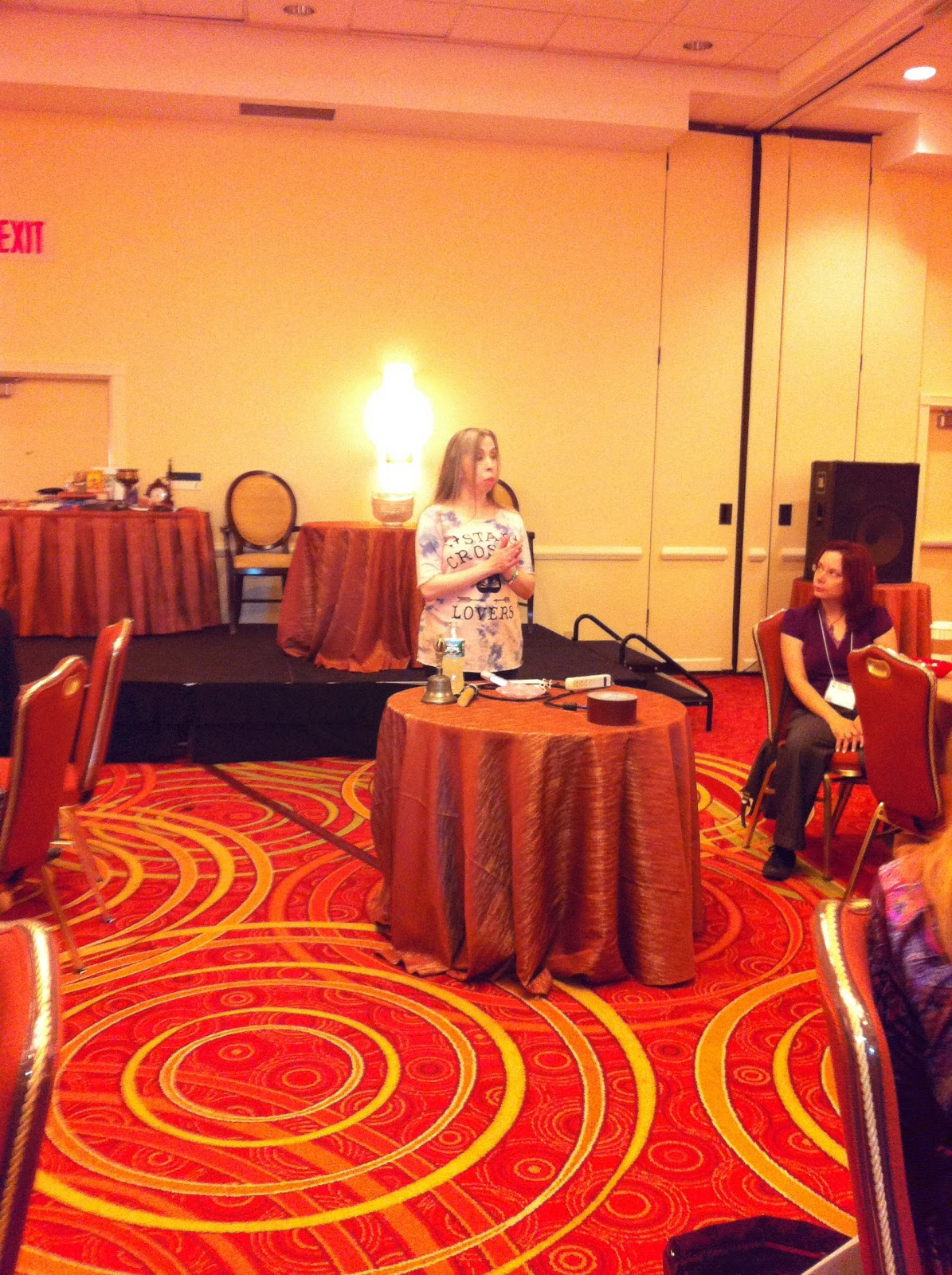 Saturday night was really the most fun. The Readers' Studio Dinner Banquet was happening, and people were encouraged to dress up as their favorite tarot cards. Em and I went as the Fool and the High Priestess. 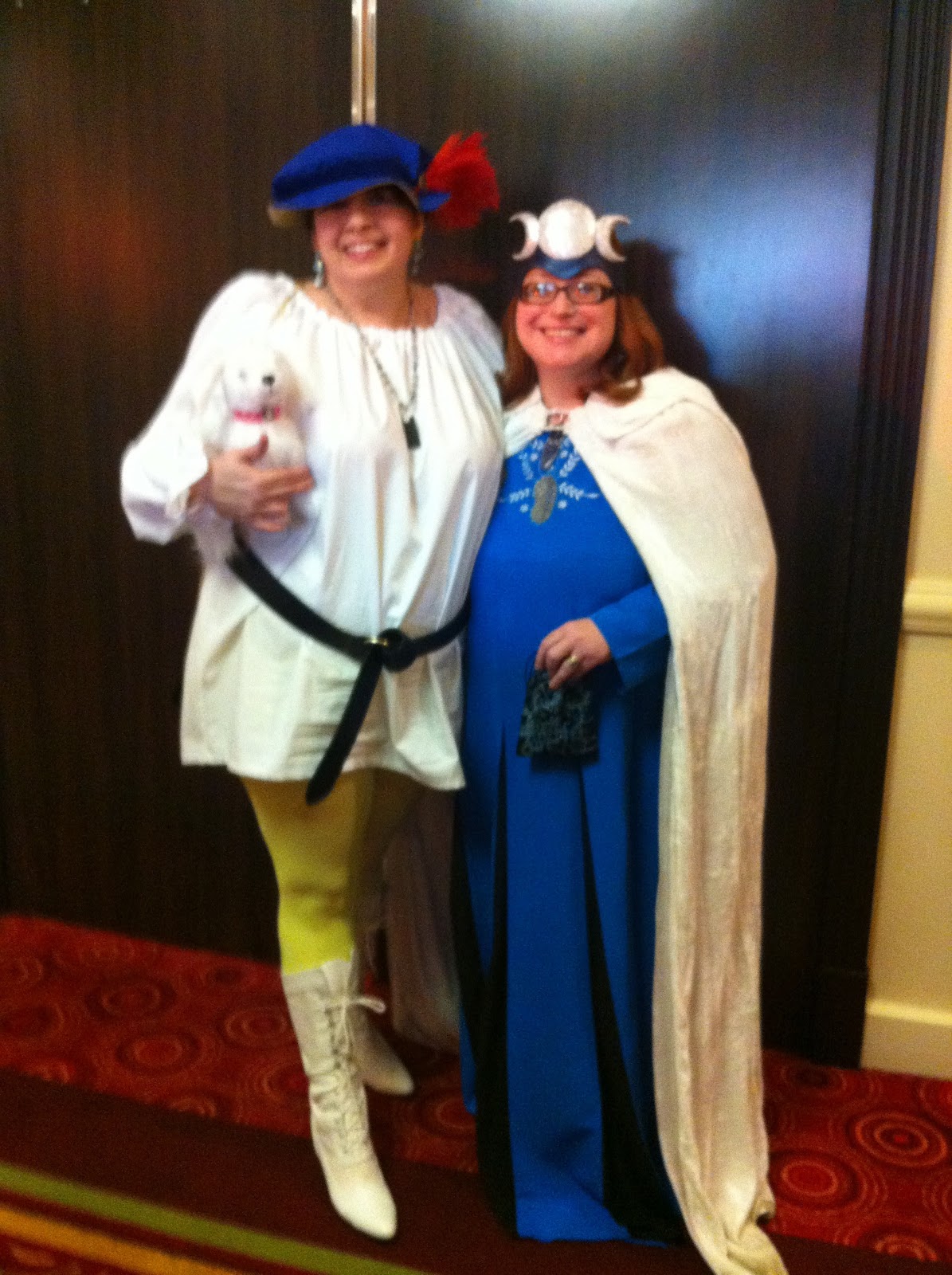 After the banquet, we decided to check out the Readers' Studio Tarot Lounge - an area of the hotel taken over by the conference for hanging out, doing readings, and so forth. We had the very unexpected pleasure of getting to chat with Mary K Greer! 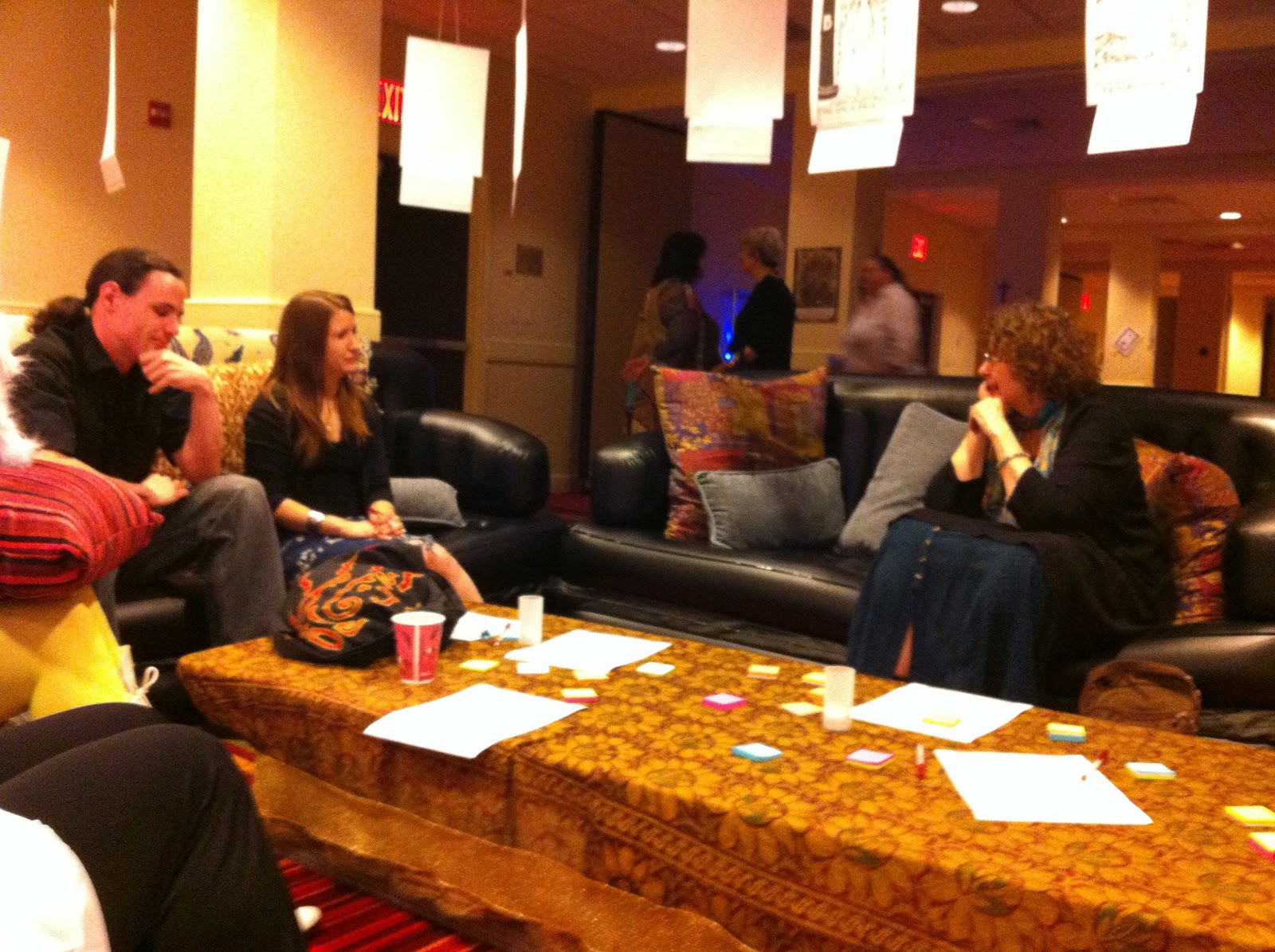 Here's Rachel and her hubby Bill chatting with Mary. We are sitting on the very adorable inflatable couches the Readers' Studio installed in the room!

Sunday morning we stayed for a bit, but had to run off early due to having to head out to a Beltaine ritual later that day. I have to say it was a wonderful time, lots to think about, and lots of new connections!

Good morning and happy Beltaine to all those who celebrate! Today's card is the Chariot. 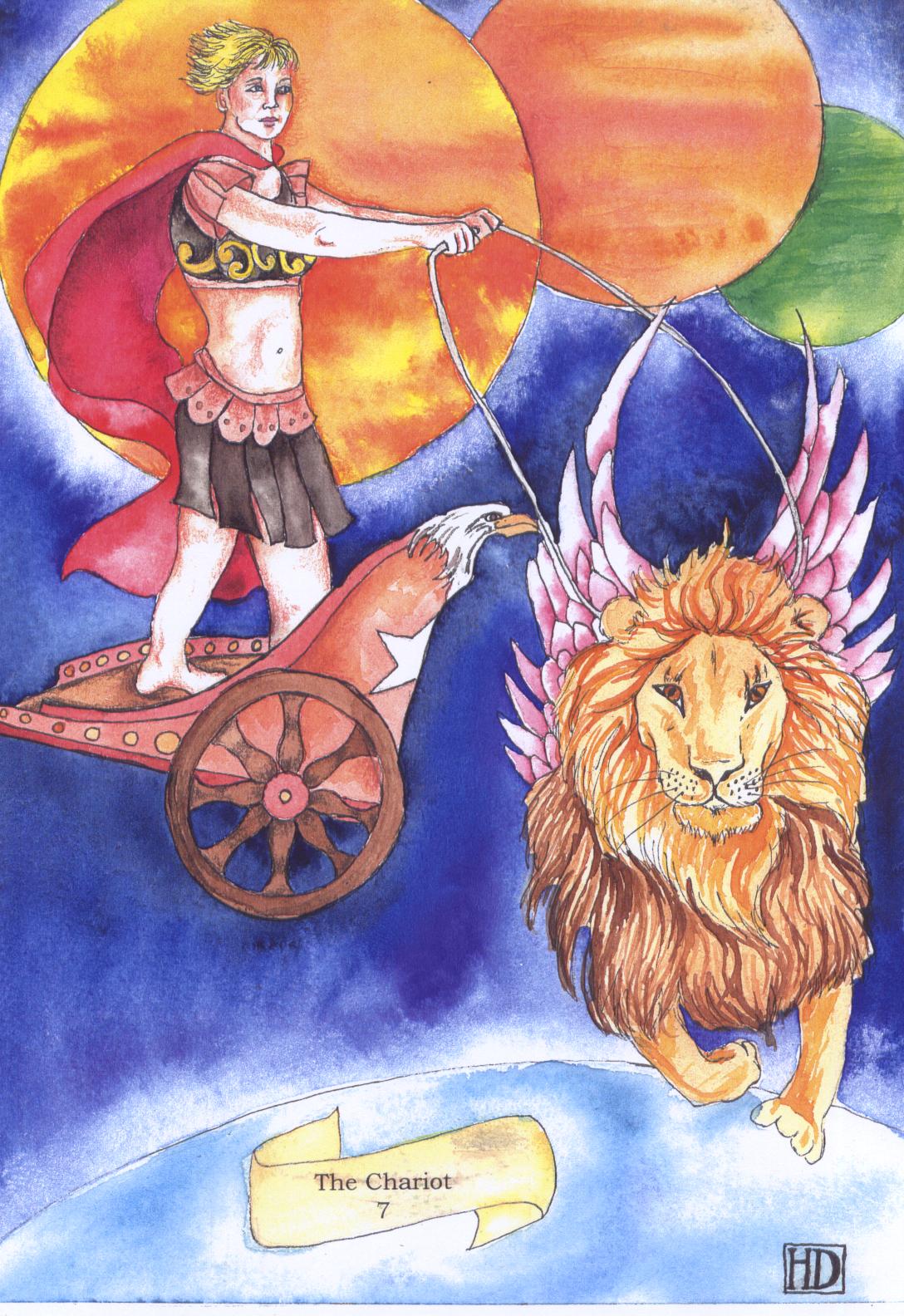 This card comes for me at the dawn of some new entrepreneurial enterprises which I will be sharing with you all very soon. I do plan on teaching some Tarot classes this summer, so do stay tuned for that. The Chariot is very much about seeking out success, and I have also seen it as a card that asks, "What drives you?" I am personally being driven right now by a need for seeking out new endeavors and ways of thinking about my livelihood, so for me, this card feels very appropriate today.

I am also somehow reminded of my current obsession with the show "Vikings" on the History channel, which just had its season finale.The central character, Ragnar Lothbrok, based on Ragnar Lodbrok of Ragnar's Saga, is always seeking more - more land to plunder, more treasures to be had, more sons to be borne, more women to love. He is driven by his need for more - he is driven by his desires rather than driving himself where he wishes to go. The season ends with his current wife, the shield maiden Lathgertha, worrying that his desires will be his undoing.


Listen to the song and ask yourself if you are the Chariot Driver of your own life, or are your desires driving you? Where will you drive the vehicle of your own life?
Posted by Unknown at 5:27 AM No comments:

This Blog Needs a New Life!!

I just spent the last weekend at the Readers' Studio Conference in New York with some wonderful fellow Tarotists and spent lots of time talking and pondering what kinds of things to do with my website and with my blog and with my life as well. This summer will no doubt see me offering more classes, not just on Tarot but some other subjects as well. Keep posted to my facebook page and right here to see what I'll be up to!
Posted by Unknown at 9:50 AM No comments:

A few days ago, I received the sample copies of The Fellowship of the Fool Tarot book. They looked pretty great, and I was psyched. My friend Debbie had done a great job of laying the book out and making it look professional and fabulous. Sadly, one of those things that happens to artists and writers happened to me.

I felt as though it needed MORE. More information on the Minor Arcana, in particular. I had been taking all my old notes from Tarot classes I'd taught and compiled them to make the book. And what I really needed to have in the book was more information concerning THIS deck and why I might have done things the way I did. I had not spared any details in the Major Arcana chapter, so what had been my issue with the Minor Arcana chapter?

Truth is, I was tired. I wanted it to be DONE. And then once I was holding that book in my hands, I realized that I wasn't doing myself or anyone else any favors. It was time to stop holding back and treat the Minor Arcana with respect! There are certainly books out there which don't give the Minor Arcana their proper due, and dang it, my book was not going to be one of them.

I found myself re-energized, and I managed to do nearly everything I needed to do just yesterday. Hopefully, the result will yield a better, more illuminating, easier to read book and a better guide to my cards.

So my friends, it will be just a little bit longer before the book appears, but not too much!
Posted by Unknown at 6:32 AM 1 comment: 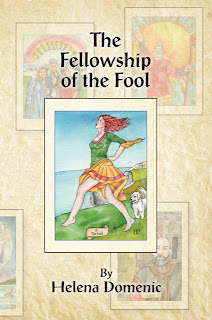 But I am plan on being back a great deal more!

I am waiting to get the first sample copy of my new book, The Fellowship of the Fool Tarot - once I've had a chance to check it over, we will print more! And I will be sure to let you all know when they are available. There will also be more Tarot news from me shortly, but for now.....shhhhh it's a secret.

Hopefully that mystery will keep you coming back for now.

And ciao for now, more later!
Posted by Unknown at 10:16 AM No comments:

The card I drew for today is the Adept of Staves, which in traditional Tarot decks would be the King. 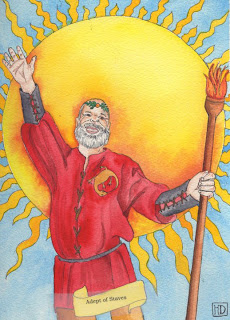 I think I may have mentioned in another entry that generally, Staves are fiery and do not like to be still. Weighted down with responsibility, they may sometimes try to stir things up on purpose. Adepts are about how we enact social responsibility in the world, and this Adept is very good at getting people "fired up" and working at something they feel passionately about. He is a leader who enjoys leading because of the obstacles he likes to push through and resolve. He is also someone who believes he is always in the right, so this is a quality that can both serve and be an obstacle in and of itself.

Welcome to the Fellowship of the Fool!

Welcome to the official blog for the Fellowship of the Fool Tarot! I'll be offering decks for sale here as well as insights and thoughts on Tarot, art, and other things that cross my mind! Please check back often for updates!

Get a Fellowship of the Fool Tarot Deck Right Here!

Find Me on Etsy!

The Fellowship of the Fool Tarot Deck

Promote Your Page Too